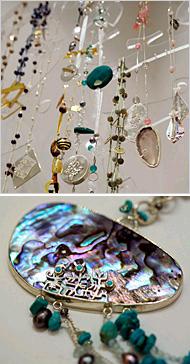 At first, the etched designs on the necklaces, earrings, bangles and cufflinks look like fish skeletons, tiny lizards, cactuses, even stylized camels. But on closer inspection, they resemble hieroglyphics, a primitive language inscribed in gleaming metal. This is the language of Lama Hourani, a young Jordanian jewelry designer.

She says that those mysterious echoes of visual and historical recognition are her preferred mode of communication with her intended audience: the stylish, mainly young Arab women who buy her jewelry.

"The designs are simply symbols, my own calligraphy," Ms. Hourani said. "They usually remind people of things they've seen      in the natural world, in the desert. I've always been fascinated with Jordanian culture, and I wanted to find my own way to        present it to the world."

Ms. Hourani, 28, who is the daughter of a prominent Jordanian political scientist, Hani Hourani, studied jewelry design in            Vicenza, Italy. Since her return home to Amman three years ago, she has been playfully expanding on traditional Arab                metalworking methods with whimsical, almost naïve-looking designs drawn from the Jordanian landscape and wildlife, usually      wrought in silver and more rarely in copper or bronze. Her choice of materials, too, is intended as homage to modern Jordan's    Bedouin heritage, Ms. Hourani said.

"Jordanians used to measure social status by how much silver a person owned, and in general all the Bedouin people are very        proud of their silver work," Ms. Hourani said.

Ms. Hourani sells her work at the Foresight Art Center, a spare little gallery near the Four Seasons Hotel in central Amman.      Ms. Hourani is at her best with pared-down pieces: earrings made from smooth, hammered copper plates, eye-catching in a        mass of dark ringlets, or silver cufflinks in Ms. Hourani's signature lizard-skeleton design.

Sign up for our emails and be the first to know about new arrivals and special events.